Bhagavan Ramana Maharshi took me into his Sharanam in April 2018, and my life has never been the same again. I write this with some conviction, because life took a turn for the better after this point. Bhagavan did not solve all my problems, but made me stronger and more dispassionate. But then I wouldn’t have dreamt of asking Bhagavan to solve my problems en masse’- his presence is enough in my life To Bhagavan, pleasure and pain were equally insignificant, though I feel the share of pain in his life was enough to break common mortals, but not him. That’s exactly the point where Ramana touches my life- I strongly feel one should have gone through at least some pain in life, preferably deep pain and suffering, to have the true purport of Bhagavan’s teachings, for his gospel was soldered in the cauldron of suffering which gives a timeless appeal to it. If you want to conquer pain and suffering, look no further- Bhagavan is there to guide you through the extensive Samsara and all things, good and bad that it has to offer. You only have to listen to your heart, the true spiritual heart.

To me, Bhagavan is my spiritual father, and far beyond any other relationships – precisely because he demands so little from me, and because he represents me, and anyone else for that matter. He is an Advaitin, who in the true spirit of non- duality does not discriminate between one form and the other. For, to quote his Upadesha Saram, “ The Individual Soul, World and God are but manifestations of the same Self, like silver in a mother of pearl, which appear and disappear at the same time.” That is to say, We are God, and God is Us, in the true Upanishadic spirit of “Aham Brahmasmi” (I am  the eternal one or Brahman).

This series of photo features, which are dedicated to the lotus feet of my spiritual father Ramana, represent my humble attempts to catch the beauty of the town of Tiruvannamalai (195 km from  Chennai and 200 km from Bangalore)  where Bhagavan spent his entire adult life, and which was his Kashi/ Chidambaram/ Haridwar/ Rishikesh. Mecca/ Jerusalem , whatever one may call it. In the Maheswara Khanda of Skanda Purana, sage Veda Vyasa describes in great detail the wonder of Arunachala

For me, Ramana is Shiva, and Shiva is Ramana. I worship both as the same. Arunachala is a manifestation of this Shiva.

The Arunachala Hill (Arunagiri)  is Shiva, and Shiva is the Hill.  Bhagavan Ramana, in the entire course of his life, never expressed a desire to visit any other spots of pilgrimage, because, as he explained, “Even Kailasha is just the abode of Shiva, so are places like Rishikesh and Haridwar associated with the Lord, whereas Arunachala is itself Shiva in the form of a hill. “

The hill is magical, and casts a spell on you, even if you are a rationalist (I certainly saw myself as one in the beginning). There is something magnetically attractive and mysterious about this forested outcrop which has held the attention of saints and mendicants since times immemorial, including Jagadguru Adi Shankaracharya;  Veda Vyasa;Gautama Muni ; Appar,  Sundarar, Gnanasambandar. Manikavasagar (revered Tamil saints or  Nayanar);  Guhai Namasivaya; Guru Namasivaya and Virupaksha Deva . Adi Shankaracharyaproclaimed it as Mount Meru.  To Bhagavan, whose only attachment if any, was to this hill, it is the spiritual centre of the world. As it is to his devotees. Bhagavan highly recommended the 16 km long circumabulation (Girivalam) around the hill, even to those who tended not to believe in its spiritual powers, as he would explain , in his inimitable simplistic style, “It will at least do good to your health. There are many medicinal plants on the way whose air is good for the health.”

“By seeing Chidambaram, by being born in Tiruvarur, by dying in Kasi, or by merely thinking of Arunachala, one will surely attain Liberation.”

I hugely enjoyed the Girivalam last July, and am raring for more. Here, I have attempted to capture various facets of Arunachala taken during my visit to Tiruvannamalai in July 2018:

Arunachala Hill in its green and beautiful avatar

Life meets Death-  ducks swimming in the shadows of Arunagiri- taken at the Eeshaniya Lingam Thirtham(pond) next to the town’s burial grounds where I spent two hours and even witnessed a cremation. The Eesaniya lingam represents the final form of Shiva- that witnessed in the crematorium.

In the shadows of Arunachala

The Hill seen from the town 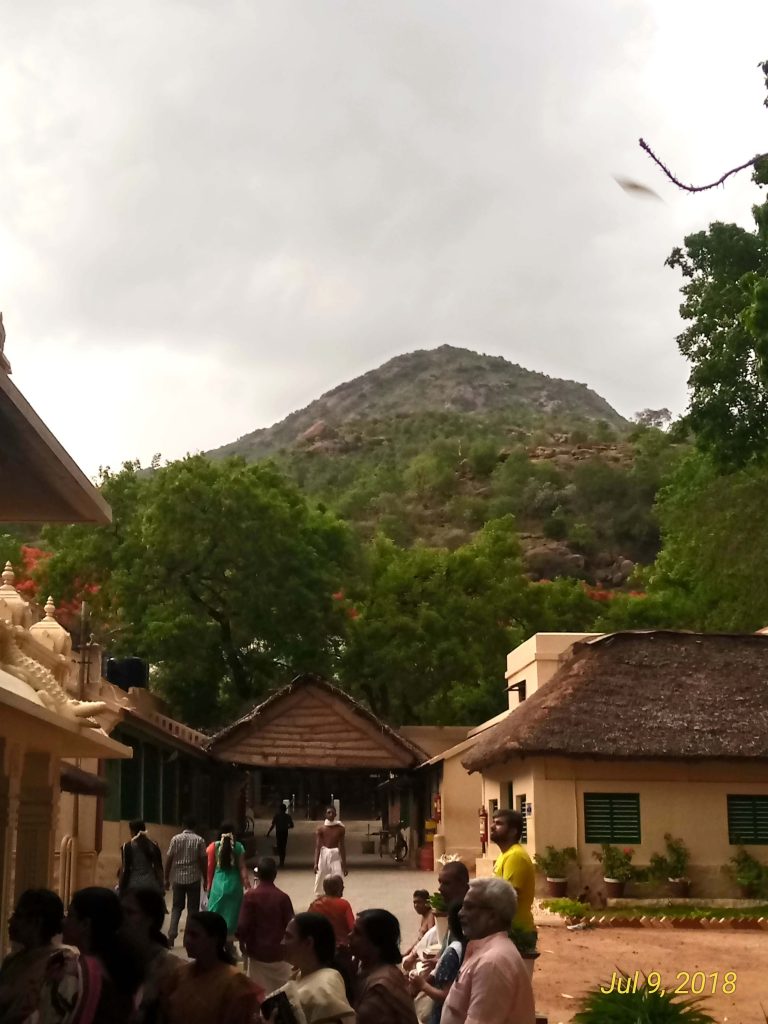 Arunagiri seen from Ramanshramam. The Ashram is situated on the Southern slope of the Arunachala Hill. 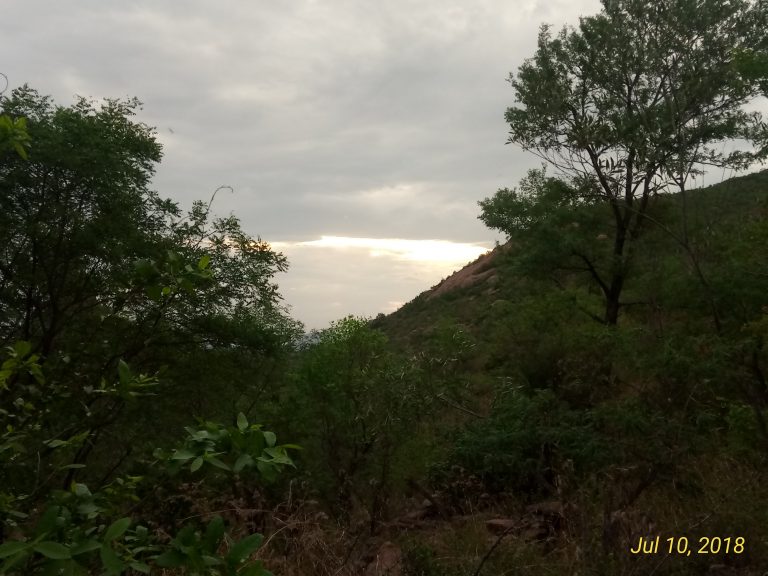 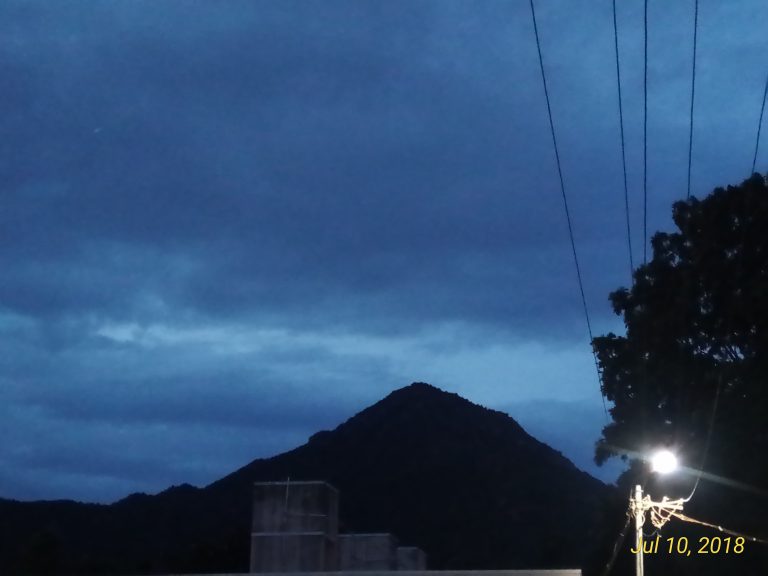 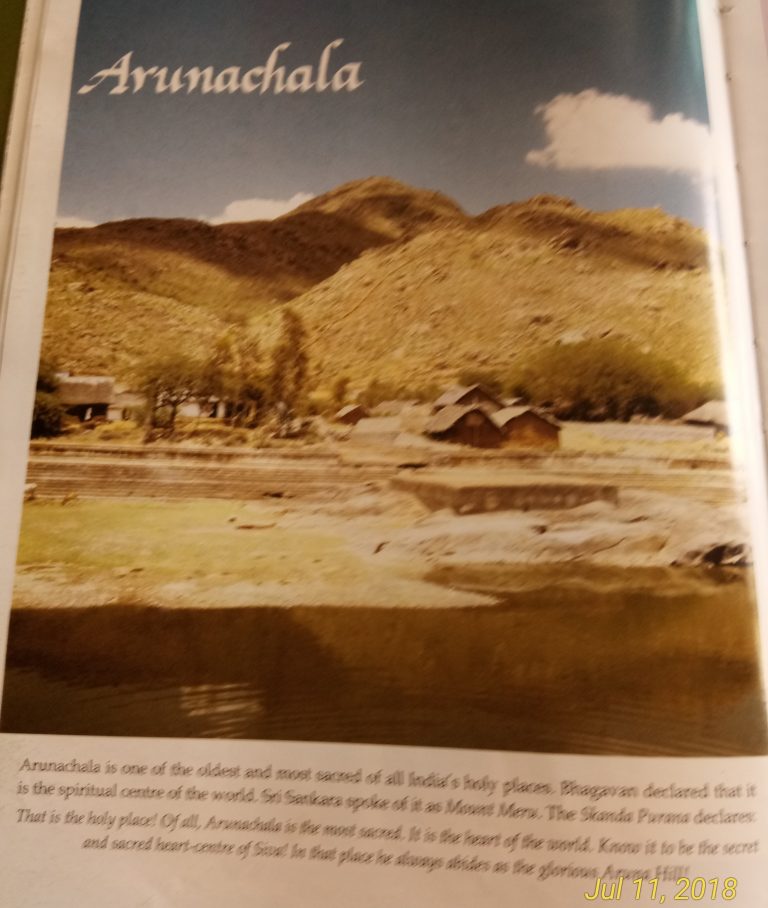 About the Hill- from the Ramanashramam archives 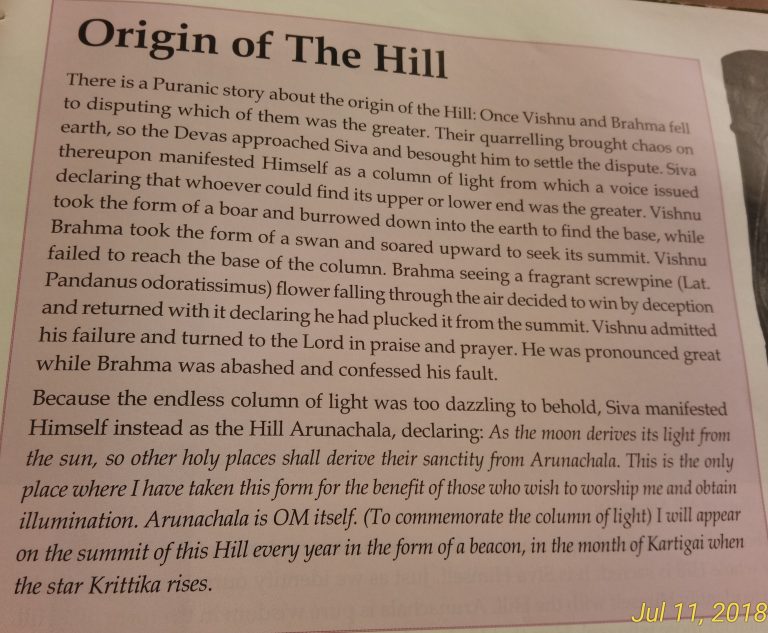 The history of Arunachala- from the Ramanashramam archives

The Hill seen from the Girivalam  ( circumambulation) path

“How was I attracted here? By Arunachala. The power cannot be denied. Again, Arunachala is within and not without. The Self is Arunachala.”

“In whose heart Shiva resides as the beloved,

Tell me, can he be ever afraid of death?”