Ramanasramam is the ashram of Bhagavan Ramana Maharishi in the town of Thiruvanamallai, Tamil Nadu. Devotees from all over the world come here to bask in the grace of Bhagavan. It has the following important areas:

On entering the New Hall, the objects that first attract the visitor’s attention are a life-sized statue of Sri Ramana Maharishi and a large yogasana, or couch, beautifully carved from a single stone and polished to look like black marble. This hall was specially built to accommodate the increasing number of devotees for whom the Old Hall, described below, was found to be too small. But Sri Ramana Maharishi used the New Hall and the couch for only the few months leading up to his Mahanirvana. 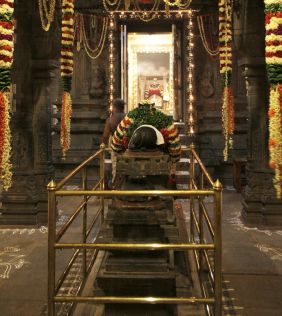 The door in the western wall of the New Hall leads directly ahead into the Matrubhuteswara Shrine. This imposing shrine was constructed under the personal supervision of Vaidyanatha Stapati, a famous temple sculptor and architect. The Garbha Griha (sanctum sanctorum) contains a sacred Siva Linga and a Sri Chakra Meru sanctified by Sri Maharshi’s own touch. A special worship known as the Sri Chakra Puja is conducted here on all Fridays, full moon days and the first day of all twelve solar months. On the outer walls of the Garbha Griha are the sculpted images of Dakshinamurti, Lingodbhava Murti, Vishnu and Lakshmi. At the southwest and northwest corners one finds two diminutive shrines dedicated to the gods Ganesa and Subrahmanya, respectively.

There is a similar shrine to Chandikeswara on the northern side. The Nava Grahas (nine planets) find their place in the northeast corner. The pillars supporting the roof contain several images of gods and goddesses. A small Nandi or bull is placed on a high pedestal facing the entrance to the Garbha Griha. The entire shrine is built of superior granite.

Passing out of Mother’s shrine through a door in the northern wall one comes to the shrine built over Sri Maharishi’s tomb. This consists of a mantap (a large raised platform), with a vimana or tower surmounting it. Four large carved pillars of granite, polished to look like black marble, support this tower. The beams are similarly carved   and    polished.   A lotus of white marble adorns the center of the mantap and over it is installed a sacred Siva Linga. A large, marble-floored meditation hall encloses this shrine.

Passing through the door of the Samadhi Hall on the north side the visitor comes to the Old Hall. This and the Nirvana Room, to be described shortly, are regarded as spots particularly sanctified by the Maharishi’s presence. In this hall thousands of devotees had his darshan (seeing a holy person or an image). It was on the couch in this hall that he spent almost all his time until about a year before his passing. It was here that devotees experienced year after year the potent peace that emanated from his presence. To this day the Old Hall remains a favorite place for meditation of visitors and inmates alike.

To the north of this hall is a large open area with some shade trees. This space is flanked by a flower garden and a dispensary on the west, a large dining and kitchen block on the east and the path which leads to Skandasramam on the Arunachala Hill to the north.

David godman on the Old Hall

The dining hall and its new extension can accommodate nearly 800 people and the kitchen is large enough to cook, on special occasions like the Jayanti (Sri Maharsihi’s birthday), meals for as many as two or three thousand people. The place where Sri Maharishi used to sit for his meals in the dining hall is indicated by a large photograph of him that rests on a marble platform. Passing through the old dining hall and out the door on the north side we enter the new dining hall, which was built in recent years to accommodate the ever-increasing number of pilgrims. To the east of the kitchen and separated from it by a passage is a storeroom for provisions. Another passage separates the storeroom from the room for men situated to the south of it. This passage leads to the Veda Patasala or the boarding school where young boys are taught to chant the Vedas and further on to the gosala in which the Ashram cows are kept. Further east are placed the bathrooms.

Vedapatasala: Yajurveda school where students of the Vedas are trained in their traditional vocation. 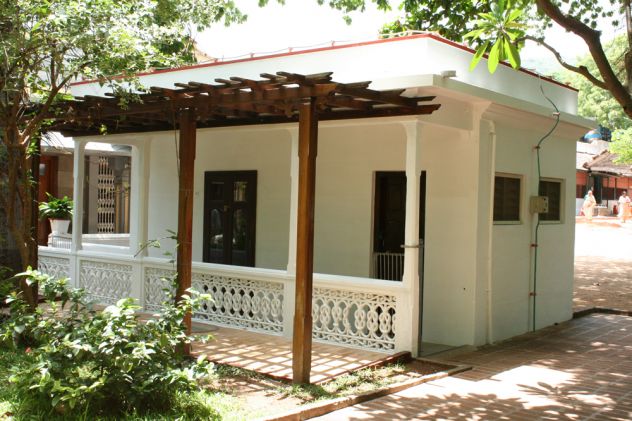 The small Nirvana Room situated to the east of the New Hall and north of the office is the room in which Sri Maharishi spent his last days and is thus a spot viewed with special reverence. It is kept as it was in his time. To the south of this sacred spot and facing the Mother’s Temple is the shrine erected over the samadhi of Sri  Niranjanananda Swami, the Maharshi’s younger brother and the Sarvadhikari or manager of the Ashram as long as he lived. A fine grove of coconut trees flanks this mantap and the Nirvana Room and stretches to the east.

Since Sri Maharishi’s Mahanirvana, many new guest rooms have been constructed in and around the Ashram. Additional guest rooms and cottages have been built to the west of the Pali Tirtham (tank), which during the early days constituted part of Palakuttu, a forested area where the Maharishi often walked. All the guest rooms are clean with simple beds, bathroom, overhead fan and screened windows and doors. To preserve the quiet and intimate experience of a visit to Sri Ramanasramam, the administration decided to halt new construction of guest rooms within the Ashram borders. Instead ashram has built guest facilities outside of its premises within walking distance. 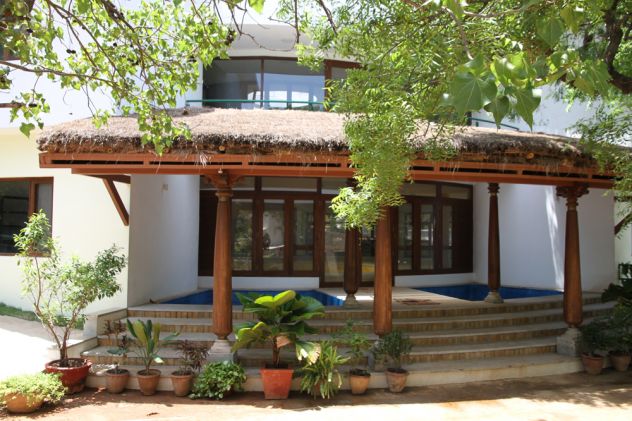 This library, located in the Ashram compound, has an extensive collection of books on spiritual matters in various languages. It is opened from 8.30 a.m. to 11 a.m. in the morning and 2 p.m. to 5 p.m. in the afternoon. Visitors are welcome to browse; membership is required to borrow books.

Skandasramam:This lovely tree-shaded hermitage on the Hill overlooking the Big Temple is where Bhagavan lived from 1916 to 1922;

Virupaksha Cave has the shape of the sacred “Om” and contains the samadhi of Sage Virupaksha. Bhagavan Sri Ramana lived here from 1899 to 1916. Both caves are historical sites preserved and maintained by Sri Ramanasramam for the benefit of visitors.

This is the schedule of a routine day at ramanashramam:

This is the link for important dates all around the year at ramanashramam:

Sri Ramanasramam is devoted to preserving Sri Ramana Maharishi’s teachings and spreading them from His ashram in Thiruvannamalai. Over the years many devotees have started centers around the world to help in spreading His teachings. These centers are maintained by sincere devotees for conducting satsangs and celebrating His Jayanti, Aradhana, Advent Day, and other similar events of great significance. Today, there are satsang groups spread across various countries worldwide from United States, Canada, Europe, Asia to Australia.

Below is a list of available Centers and Satsang Groups.