To a devotee, everything is a possibility and he ever remains ready to drown in the flow of divine grace as and when beckoned. Devotion being a subtle form of intelligence, largely intuitive in its bhaava is a tool for dwelling deeper in the layers of human consciousness and harnessing the light. The origin of Shri Ramana Sundari finds its story in one such moment of devotion within the hearts of devotees. It has no scriptural or intellectual evidence and henceforth, it remains as a concept one is open to reject or assimilate depending on how one perceives it to be.

Being a lover by default, when one comes face to face with the archetype of pure unconditional love in the form of one’s Guru, this life opens its bud to blossom itself into a fragrant flower. This turning point came in my life about four years back when I came across the photograph of Bhagwan Ramana and found myself transfixed in the dripping compassion from those eyes.

It has been four long years and still, I love best to sit and gaze at these eyes that drool of motherly love. People told me he is Shiva himself but as I dwelled deeper, I saw his Shakti tattva emerge and speak to me. His interactions with animals, his karuna for all whom he touched silently often would break my cracked and arid heart with tears of vacant devotion. About two years down the line of introduction, I suddenly encountered the path of Shakti and Tantra. Sri vidya opened itself to me in a very unconventional manner through the youtube video of Khadagmala stotra of Amritanandaji and some Devi mantras offered informally to me by a teacher. 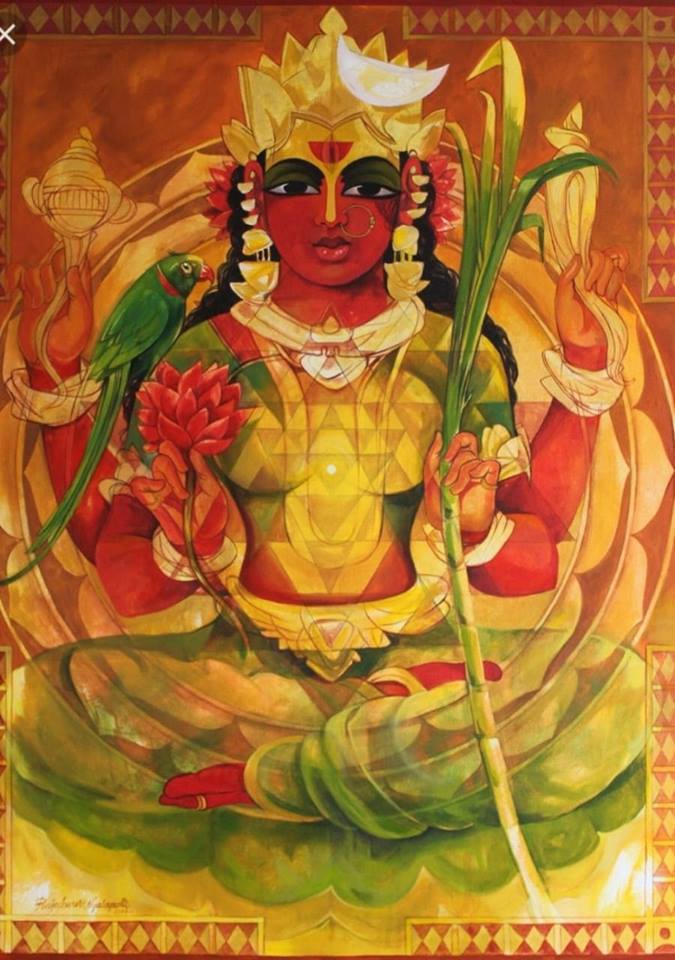 I began to work with my tools and surprisingly Bhagwan nudged me more and more through a series of synchronous incidents to learn more. My mind often roared in conflict even though I was being pushed up the wall to discover more about Devi. The conflict happened to arise as my heart felt itself torn between my Guru and the Goddess who were both so intoxicating to my devotion. The mental conflict deepened as my devotional fervor deepened to each of them. I felt torn and often would weep at my dilemma, finding no way out. I still saw them as forms and not like states of consciousness as described by advanced seekers.

In may 2018, I visited Devipuram for the first time and soaked myself in Mother Rajarajeshwari’s grace. After my return from there, amongst the many things that hit my world was a day, when I closed my eyes to meditate, and I saw Bhagwan being gulped up by Lalita. I had goosebumps. Also, I discovered the Matrubhuteshwara temple( Bhagwan’s mother’s Samadhi with a consecrated Sri Chakra) at Ramanashramam and began to deeply wonder why would Bhagwan build this shrine. I asked many people what was the connection between Bhagwan and Sri chakra and a few pointers were made to his ardent devotee, Kavyakantha Ganpathy Muni. I read his life story, to no avail. I started receiving Sri Chakra blessings from pournami poojas at Ramanashramam. By then, I was inspired to do one lakh japams of the Mahashodashi mantra of Lalitatripurasundari and chantings of Lalita trishati as my sankalpam towards the mahakumbhabhishekam of Devipuram, impending in 2019. I finished my sankalpam and coincidentally landed at Ramanashramam around the same time. Coming back from there and finding myself deeply disappointed at not finding any answers, I began to meditate fiercely on Bhagwan’s form. In the meanwhile, I reconnected with Mr. Sumeru Viswam from kerala, who happens to be deeply devout to Lalitatripurasundari and has Bhagwan as his guiding light past many years. I shared my dilemma and experiences with him. The subsequent morning, Mr Sumeru processed an image and sent me:

He called it “SHRI RAMANA SUNDARI” and said it came to him in a meditative moment. I was taken aback and my eyes flooded with tears. Subsequently, in the ensuing days, he meditated deeply and channeled the entire mool mantra, the dhyaan sloka, the nyaasa, the mudra and the entire upasana schedule. It has been deeply a humbling experience for both of us to come across this entire download as first hand information.

Here I humbly present to you the upasana details of Shri Ramana Sundari:

“Over the past 5years, my focus was on Srividya Srichakra upasana and related aspects……In the course of the study and research, I could gather more than a dozen Sundari forms, having authentic textual based mantras with Rishi. Chandas. Nyasa and Dhyana.Vidya ganapathi, subramania sundari, Siva sundari, gopala sundari, nrisimha sundari, Pratyangira sundari, varaha sundari, ramasundari, dakshinamurti sundari  and so on.Though there is no solid scriptural, puranic basis for these Forms, it is being followed and practised by some, if not many and the tradition kept alive,particilarly in South India.

What prompted me to search for Ramanasundari concept  was the messages shared between myself and Dr. Pallavi. Her experiences while meditating on Ramana, often overlapped by Tripurasundari, was interesting. Being a Srividya upasaka herself, no wonder she experienced the Sundari impact in her sadhana. Ever since she shared this experience, I recollected my stay in Ramanashram, way back  in 1980,and the stunning Silenced mind experiences while sitting in front of Maharshi’s granite statue in the temple hall. All the memories related to Bagavan, the Srichakra drawn by himself, the mahameru prathista over Maharshis mothers samadhi, the association of Vasishta ganapati mini, Umasahasram…. Etc were unleashed in my mind and in a nights meditation, the concept of Ramanasundari was revealed in sequence. First the mantra came, followed by other details. I gave a description of Dhyana to my student, who within Few hours gave me the Sanskrit version…… It all happened within 36hours!!! The first person to whom I shared this was Dr. Pallavi. Since it has no textual authenticity, I couldn’t anticipate it’s acceptance by her or by any Ramana devotee.Perhaps, people following the jnana yoga might brush it aside as fantasy…… But to a devotee it might of some help, to see Ramana  as Tripurasundari  Herself. Ultimately, spiritual life is an exclusive relationship and interaction between the upasaka and his upasana murthi……  Bhagavan neither encouraged or discouraged any one from doing mantra japa, pooja, or ritual. But if we look closely at his life, we can see the touch of Mother, and Her tenderness and compassion manifesting in his life through the compassion he showered on the dog, monkeys, cow and to the devotees.And his devotion through the Akshara manamaala song, he himself wrote. We can see the Siva in his Sahaja samadhi and Mother in his devotional songs. Indeed He is Ramanasundari Herself.”

Dedicating all at the feet of the divine mother including a recently published book called “Shambhavi: The Shakti archetypes” and this precious download of Shri Ramana Sundari as the fused consciousness between my Guru & the Goddess, I will simply dwell in the joy of being.