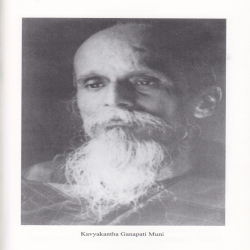 Ganapati Muni is pretty much known as the person that first gave the venerated Indian holy man the title/name Bhagavan Sri Ramana Maharshi — and as well, in 1911, introduced him to the Bhagavan’s first western disciple, an Englishman by the name of Frank H. Humphreys.

Ganapati Muni was born in 1878, one year before Ramana. The father, Narasimha Sastri, had a unique experience. He had gone to Banaras (Varanasi or Kashi) in November 1878. When he was in the temple praying in the presence of the deity Ganapati, he had the vision of a little child emanating from the deity and entering into him. At the time when Narasimha Sastri was witnessing this vision in Banaras, his wife Narasamamba gave birth to a male child in her parental home. This child was born under these auspicious indications given to both parents. The father appropriately named this son Ganapati, rooted in the conviction that the child was an emanation of the Lord Maha Ganapati Himself. It appears that Ganapati was conscious of his divinity. He later wrote in ‘UmaSahasram‘ and other works that he was born as an amsa, a portion, of the God Ganapati.

While still a boy, he had finished studying many poems and then devoted himself to the study of grammar and poetics. At the same time he delved deep into the writings of Vyasa and Valmiki. He repeatedly read and reread the Mahabharata. His horizon widened and his intellect blossomed with an ever-deepening perception. Like in ancient times, Ganapati desired to acquire immense strength and power through the practice of austerities and mantra japa.

Though married at an early age, which was the custom of the times, Ganapati, when hardly 18 years old, set out and wandered from one sacred place to another, residing in places like Bhuvaneshwar, where he performed his tapas. In a dream while in Bhuvaneshwar, Ganapati saw a woman putting honey in his mouth and onto his tongue and then vanishing. Later, the Muni himself narrated this to his disciples and said that only after this incident did he gain complete mastery over poetry.

When Ganapati was staying in Kashi he came to know that there would be a great assembly of Sanskrit scholars in the famous city of Navadwipa in Bengal. On the advice of his friends he got a letter of introduction and started for Navadwipa. There he passed the difficult tests in extempore Sanskrit prose and poetry with an effortless ease that stunned his examiners. Unanimously, they conferred the title ‘Kavyakantha’ (one who has poetry in his throat) on him forthwith. He was then 22 years old.

Ganapati Muni was a known Sanskrit scholar and poet, reported to have an eidetic memory. So adept was his memory and mental skills, having never heard one word in Telugu he was able, in 15 days, to totally master the language, both verbally and written, fluently. So good was he that in 1904 Ganapati Muni was given the position of teacher of the Telugu language in the city of Vellore. However, his days were spent doing standard teaching techniques rather than participating in or imparting mantra japa. By 1907 he left his teaching position and returned to Arunachala to resume mantra japa. One day he was assailed by pains, troubles, and doubts. Seeking an alternate solution other than his own capabilities; he decided to visit the young Swami who was now being said to be living in a cave on the side of the hill. Sometime around noon on November 18, 1907, he climbed up to Virupaksha cave and found Ramana sitting outside, alone. He prostrated himself and said:

The young Swami took a little time. For at least fifteen minutes he silently gazed at him. Then in Tamil, Ramana broke his silence of eleven years and spoke. The English translation of what he said reads thus:

“If one watches whence the notion ‘I’ arises, the mind is absorbed in That; that is tapas. When you recite a mantra, watch where the sound is coming from, within you; when you sing a song or prayer, watch where it is emanating from: your Heart. Put your attention on That. That is tyaga, that is TAPASYA, that is all.”

As the years went by following their initial meeting and the giving of himself over to Ramana, even though on the surface the two sages seemed to parallel and appeared to be side-by-side in their philosophies to outside observers, a huge chasm actually existed between them. For one thing, Ramana used silence to teach, Ganipati Muni, a scholar talked — and talked and talked. However, in those talks, even though he was an ardent Ramana supporter, how he advocated Ramana’s teaching was presented with his own personal spin on it.

There are several other areas surrounding Ganapati Muni that are extremely interesting relating to him that are also of major import. For example, Ganapati Muni is the only known person in modern times to have experienced a phenomenon known as kapalabheda, or as found translated in the Taittirya Upanishad: Kapalabheda is a word used to describe a physical cleavage, an actual opening or splitting in the skull at ‘the knot on the head,’ which is a spot on the skull roughly corresponding with what is called the Bregma, with the splitting attributed to having been caused by things spiritual. The Bregma is the region where the frontal and the two parietal bones come together in an almost “Y” shape on top of the skull. At birth the spot is a depression soft to the touch for roughly 12-16 months after which it more-or-less ossifies into a single unit. In The Mountain Path, No.3 (July 1978), pp. 147-148, in an article titled “The Muni and the Maharishi,” describing what Ganapati Muni went through relative to the experience, the following is found:

“That night Ganapati suffered terribly. There was an unbearable burning sensation throughout his body…It looked as though his head would break into pieces at any time. He suffered unbearable pain. Suddenly a sound was heard, something like smoke was seen. The Kundalini had caused an aperture at the top of his skull… After that experience for ten days something like smoke or vapor was found emanating from the orifice at the top of the skull. By that time the burning sensation subsided. The play of force became bearable. The long story of suffering, pain and agony ended. The body was filled with the flow of cool nectar of bliss. The face of the Muni reflected an ethereal splendor. His eyes bore the effulgence of the supernatural. After this extraordinary experience of kapalabheda, the Muni lived for fourteen years.“

What he did have was extraordinary mental abilities that enabled him to manifest powers in the area of supernormal perceptual states known as Siddhis. So great was an ability it has been reported he could bring down or stop the rains. He could destroy a whole town. Once when he was harassed during his stay in the city of Nasik he cursed that the whole city should be destroyed. Soon the whole city was destroyed through the dreaded disease of plague.

Ganapati Muni wrote his great devotional epic hymn, “UmaSahasram,” One Thousand Verses on Uma, after accepting Sri Maharishi as his Guru on November 18, 1907. This work was the magnum opus of the seer-poet. He never wrote for name or fame, but composed poetry as a form of tapas, inspired by his spiritual exultations. He composed “UmaSahasram” in gratitude to the great Goddess Uma, for granting him the Maharishi as his Master. A scholar poet, Śri Vāsiṣṭa Ganapati Muni has many spiritual and other writings in Sanskrit to his credit. Umāsahasram, gītamālā, ramaṇagītā, ramaṇacatvārimśat and saddarśanam are a few titles well-known among his disciples and others. But very little is known about his other numerous Sanskrit writings, covering a wide variety of topics: praises and prayers to various deities (stotras), poetic compositions (kāvyas), philosophy (darśana), logic (nyāyaśāstra), medical science (āyurveda), astrology and astronomy (jyotiṣaśāstra), commentaries (bhāṣya), novel (ākhyāyikā), letters (patrāṇi) and other research works. His versatility can also be judged from his writings sāmrajya-nibandhanam (a proposed constitution for India) and lālibhāṣopadeśa (a new language for the Indian people). He was spontaneous in composing all these either in verse form (ślokas) or in the form of aphorisms (sutras) or prose form (gadya). Nevertheless, all these were the result of his tapas, an outpouring of his soul in seeking or gratitude to the Divine. the ramaṇacatvāriṃśat (40 verses in praise of Bhagavan Sri Ramana Maharishi) is chanted daily both at the Sri Ramana Ashramam and in innumerable homes of the devotees of Sri Ramana Maharishi. Of his vast and variety of sūtra writings, it would be difficult to single out any one as more meritorious than the others.Daśamahāvidyāsūtram (the ten cosmic powers of the Divine Mother as described in the tantras) is an outstanding composition, in which the Muni has described the ten cosmic aspects of the Divine Mother and their significance. Here he has also brought out the association of these ten cosmic aspects of the Mother described in the Tantra with the corresponding Vedic deities. Thereby, not only has he been able to bring forth a link between the Vedas, Upanishads and Tantras, but also has been successful in dispelling several wrong conceptions on the significance of these deities. These compositions reflect Muni’s great powers of Yogic perception. The way in which he has expounded the different deities such as kālī, tārā, sundarī, bhuvaneśvarī, pracaṇḍacaṇḍī, etc., and correlates them to the Vedantic concepts has once for all removed all antagonisms and has bridged the so-called gulf between the Vedantic and Tantric schools of philosophy.

Vasistha Ganapati Muni was a valiant soldier in the cause of Truth and Divinity. For communing with the Divine, the Muni was well endowed, gifted with marvelous powers of mind, intellect and spirit. To this day, the greatest scholars of modern times are astounded by his versatility and genius. With absolutely no formal schooling, he could immediately grasp the most intricate problems of the day and devise solutions. His immense scholarship of Hindu Scriptures, coupled with a faultless memory and Divine intuition shone on his face and flowed out through his writings and oratory.  He belonged to the era of Rig Vedic seers who were gods among men, playing in the world their role of leadership of both temporal and spiritual matters.

The poet-seer, Kavyakantha Ganapati Muni, met Sri Aurobindo on August 15, 1928. He stayed at the Ashram for about a fortnight. During his stay the Muni meditated alone with the Mother a few times. At the instance of Sri Kapali and Sri S.Doraiswamy Iyer the Muni translated some portion of Sri Aurobindo’s “Mother” into Sanskrit verses, with some notes. Seeing the Muni’s translation, Sri Aurobindo generously declared that the translation far excelled the original.

Ganapati Muni was a great tapasvi whose one aim in life was the restoration of Mother India to her ancient majesty. Unlike others who aimed at liberation for themselves, this inspired soul believed that he must obtain the grace of God, not only for himself, but also for the nation, and through it for the betterment of the world. Towards that consummation he had done penance from his early youth and very rigorously during the last years of his life.

However, it is difficult to summarize the thoughts, perceptions and literary ability of the Muni. The Muni, indeed, was a versatile genius and can be compared with Kalidasa and Shankara in poetic renderings, with Vyasa in sutra writings and with Patanjali, Shabara and Shankara in writing commentaries. The writings of the Muni are not just some products of literary activities but are the records of his unique Yogic experiences and subtle visions and will be a guiding spirit and lamp for the centuries to come.