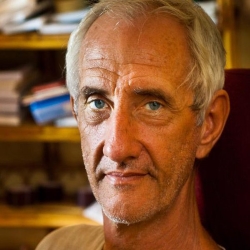 David Godman is the world’s foremost researcher and scholar of Sri Ramana Maharishi’s life and teachings. He has written or edited 16 books and numerous articles about Sri Ramana, Sri Ramana’s direct disciples, and related topics. His first book, Be As You Are,  published in 1985, has become the standard anthology of Sri Ramana’s writings. He has spent most of his life in THiruvanammalai where Sri Ramana’s ashram is located.

David was born in 1953 in England. During his second year at Oxford University, while reading Ramana Maharishi’s writings for the first time, he fell into a state of silence which transformed the way he viewed himself and the world. It was sometime in his second year there that he became interested in Ramana Maharishi after reading about his teachings in a book that had been compiled by Arthur Osborne. Godman has said:

“It wasn’t that I had found a new set of ideas that I believed in. It was more of an experience in which I was pulled into a state of silence. In that silent space I knew directly and intuitively what Ramana’s words were hinting and pointing at. Because this state itself was the answer to all my questions, and any other questions I might come up with, the interest in finding solutions anywhere else dropped away. I suppose I must have read the book in an afternoon, but by the time I put it down it had completely transformed the way I viewed myself and the world.”

Finding it impossible to study for exams, he dropped out in his final year and rented a house in rural Ireland where he read Sri Ramana’s books and practiced self-inquiry.

The following year, in 1976, he went to India. Despite his intention to stay for only six weeks, he has been there almost continuously ever since, residing mainly in Thiruvannamalai where Ramana Maharishi’s ashram is located. From 1978 to 1985 he was the ashram’s librarian.

In 1985 his edited anthology of Ramana Maharishi’s teachings, Be As You Are, was published by Penguin.

In 1987 Godman conducted extensive interviews with Annamalai Swami, a devotee of Ramana Maharishi who worked at Sri Ramanasramam between 1928 and 1938. The interviews were the primary source for his book, Living by the Words of Bhagavan, a biography that chronicled Annamalai Swami’s relationship with Sri Ramana.

Godman has contributed to a scholarly debate on the true identity of Larry Darrel, a character who appeared in Somerset Maugham’s The Razor’s Edge. Maugham visited Ramanasramam in 1938 and later wrote an essay entitled “The Saint” about his visit. Maugham used the character of Darrel as a follower of a Hindu guru featured in the novel; the guru’s physique and teachings were based on those of Ramana Maharshi.

In 1993 Godman moved to Lucknow at the invitation of H. W. L. Poonja, Poonja, a devotee of Ramana Maharshi who subsequently became a well-known spiritual teacher. In his later years Poonja was more generally known as ‘’Papaji’’. Godman made a documentary on Poonja’s life and teachings, edited a collection of interviews that various visitors had had with Poonja in the early 1990s, and compiled an authourised three-volume biography entitled Nothing Ever Happened. In 2006, he edited a collection of conversations that had taken place in Poonja’s home in the early 1990s.

After the death of Poonja in 1997, Godman returned to Thiruvannamalai. A year later he edited and published a collection of dialogues that had taken place between Annanalai Swami and visitors to his ashram in the 1980s.

Between 2000 and 2002 Godman brought out The Power of the Presence, a three-volume anthology of mostly first-person accounts that chronicled the experiences that visitors had had with Ramana Maharshi between 1896 and 1950.

Between 2004 and 2008, in collaboration with T. V. Venkatasubramanian and Robert Butler, he translated, edited and published three books of Tamil poetry, composed by the Tamil poet Muruganar, which recorded the teachings of Sri Ramana along with Muruganar’s own experiences.

In 2012, Venkatasubramanian, Butler and Godman translated and published a bilingual (Tamil and English) edition of Sorupa Saram, a Tamil philosophical work composed several hundred years ago by Sorupananda. The three have also collaborated on translations of other Tamil mystic poetry. Among their subjects were Manikkavachakar, Thayumanuvar, and Tattuvaraya.

In 2014, in collaboration with the Whole Life Foundation, Godman filmed a twenty-seven episode, 15-hour series of talks on Ramana Maharshi’s life, teachings and followers.

David is the author or editor of the 16 books listed below. 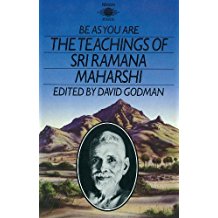 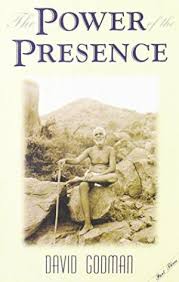