HomeDEMO newsOfferingsBlogFINDING BHAGWAN OR WAS IT BHAGWAN WHO FOUND ME ? BY DR ABHIMANYU BISHNU

FINDING BHAGWAN OR WAS IT BHAGWAN WHO FOUND ME ? BY DR ABHIMANYU BISHNU

FINDING BHAGAN OR WAS IT BHAGWAN WHO FOUND ME? 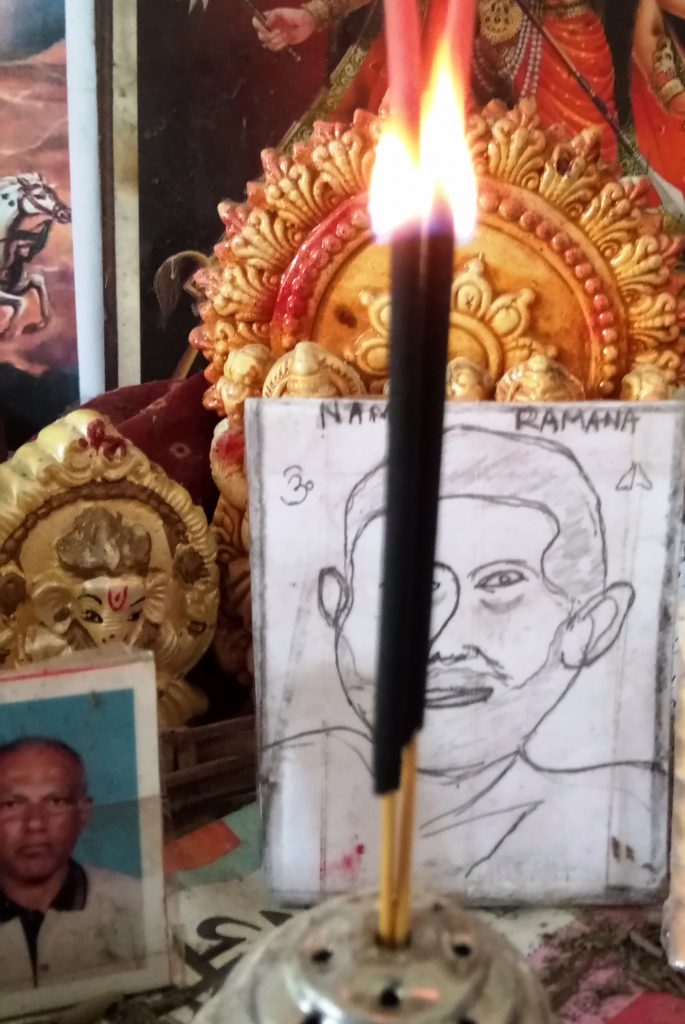 The following lines came about one week after I nearly locked myself up in my room, barely communicating with the outside world, while reading, contemplating about Bhagavan Sri Ramana Maharishi and listening to his messages, all the while meditating on Shiva. It was in response to a personal crisis and in a quest for self-discovery. Ultimately, it was probably the most powerfully intellectual yet devotional exercise of my insignificant life. At the end of it, it wasn’t difficult to find Bhagavan. He was already inside me; The Self.

I didn’t want to print his picture- I drew Him from my heart with Love and Respect with help from the website.

The way of the Self, Atman,

The way of Shiva, that indescribable one,

Seven days of being in The Self,

Seven days of Self inquiry,

From here, there is no turning back,

Because it took several births to reach here.

He is related to me as a part of the Sat- Chit- Anandam (Existence- Consciousness- Bliss).

He is a part of all of us, He IS actually all of us,

He is Consciousness and Delusion,

He is Happiness and Sadness,

He is Shiva, Vishnu, whatever you call him,

Names are but adornments of the Self,

But I prefer to call him Shiva.

He has No one, but he has Everyone

He is No one, but he is Everyone

He is in All of us, but not to be found Anywhere,

He is Reality, but also Illusion,

He who sees all of us, Because he IS us,

The Doer and the Done being the same,

That Adiguru is our eternal Self,

Because of the Guru and the Disciple

Are both the same.

Bliss doesn’t come from Money or the Lack of it,

Bliss doesn’t come from Doing or being Done,

Bliss doesn’t come from Speaking or the Lack of it,

Bliss doesn’t come from this World, which is Illusory, or leaving it for that matter,

Bliss comes from being in The Self.

Whatever we call Sattva/ Rajas /Tamas,

Whatever we call the Past/ Present/ Future,

Whatever we call Existence or even the Lack of it,

Is actually the eternal Self,

And this Self is Shiva,

To the great Adiguru Shiva whose adorned feet have always given me bliss,

In this birth, in my past births, and will do so in my future births,

Bliss in this Life, and Death when it comes,

To that Bhagavan Ramana and Adiguru Shiva,

I bow and prostate with folded hands.

Peripatetic healthcare administrator, on and off a physician, blogger and yoga enthusiast currently struggling with learning music. Owns few possessions except a ” devil may care” attitude. Father to a lovely daughter who is equally passionate about creativity.